A major step forward in the development of sensitive electronic skin

Electronic skin anticipates and perceives touch from different directions for the first time. A German research team has explored a new avenue to develop extremely sensitive and direction-dependent 3D magnetic field sensors that can be integrated into an active matrix e-skin system.
The research team (Chemnitz University of Technology) has succeeded in integrating the 3D magnetic field sensors with magnetically rooted fine hairs into an artificial e-skin made of an elastomeric material into which the electronics and sensors are embedded – similar to organic skin, which is interlaced with nerves. 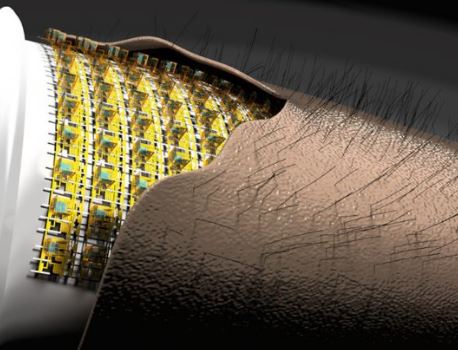 Since it was first developed in the mid 20th century, CCTV (closed-circuit television) has become a ubiquitous sight in towns and cities across the globe. However, these days modern CCTV doesn’t just record video footage, it also uses artificial intelligence with human detection and facial recognition algorithms to track our behavior and our emotions.
To protect people against this increased surveillance, German design studio Werteloberfell has collaborated with a team of technical partners to create apparel that messes with AI algorithms. The team’s first prototype takes shape as a glowing poncho called ‘ignotum’, which is latin for ‘the unknown’. 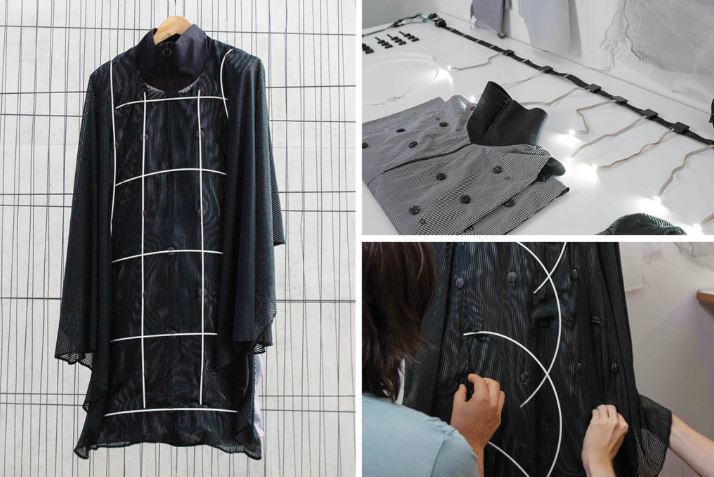 A new future for coarse wool drafted around a performance filament

According to the International Wool Textile Organisation (IWTO) it is estimated that anywhere from 40-50% of the global wool yield is such coarse wool. With TMC’s new technology, these coarse long wool fibres are drafted around a performance filament, creating an extremely fine yarn.
Herculan process opens the door for wool to be used in high abrasion and high impact zones in apparel such as socks, footwear, gloves, pants, outerwear, and many other potential applications. It’sone of the first products in the world to combine better performance benefits of wool with durability and sustainability for the apparel market. 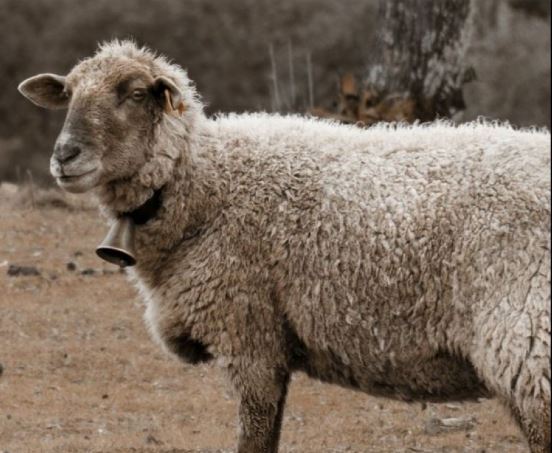 Overcoming the limitations of smart fabrics with a manufacturing approach

An international team of scientists led by the University of Cambridge have produced a fully woven smart textile display that integrates active electronic, sensing, energy and photonic functions.This is the first time that a scalable large-area complex system has been integrated into textiles using an entirely fibre-based manufacturing approach.
The resulting fabric can operate as a display, monitor various inputs, or store energy for later use. It can also be rolled up, and because it’s made using commercial textile manufacturing techniques, large rolls of functional fabric could be made this way. 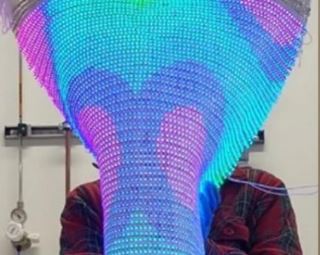 Smart sensors, energy harvesting and storage are integrated directly into
the fabric of the 46-inch woven display. © University of Cambridge

An increasing demand for clothing with a sustainable look

As in every season, the colors our customers choose for their patterns depend largely on their target markets. Nevertheless, as in all areas of the industry, a natural look is required. Fabrics should look as natural as possible. The color scheme plays an important role in this. Beige, white and cream in particular indicate minimal use of dyes and, therefore, give the impression of an environmentally conscious garment.
Yarn selection is of vital importance for the future of the lingerie industry. 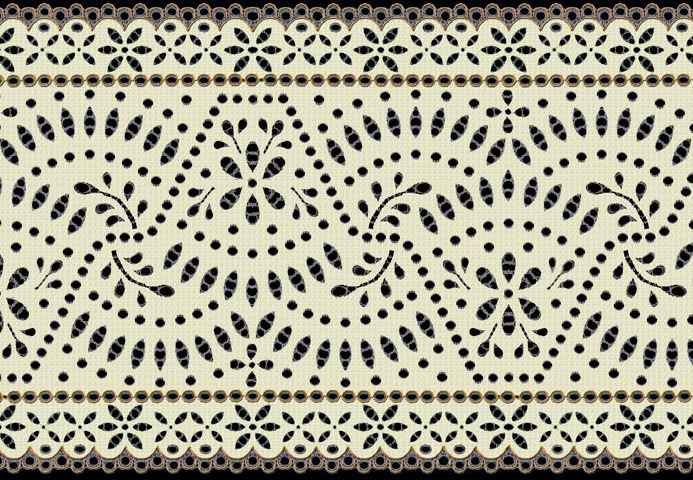 Cellulose fiber innovation of the year

The carbon fibres are obtained from the raw material wood in a novel and sustainable process designed by DITF. The HighPerCellCarbon® process involves the wet spinning of cellulose fibers using ionic liquids (IL) as direct solvents. The filament spinning process is the central technical part and it takes place in an environmentally friendly and closed system. The solvent (IL) is completely recycled. The cellulose fibers produced in this way are converted directly into carbon fibers in a further development step by a low-pressure stabilization process, followed by a suitable carbonization process. No waste gases or toxic by-products are produced during the entire process sequence. 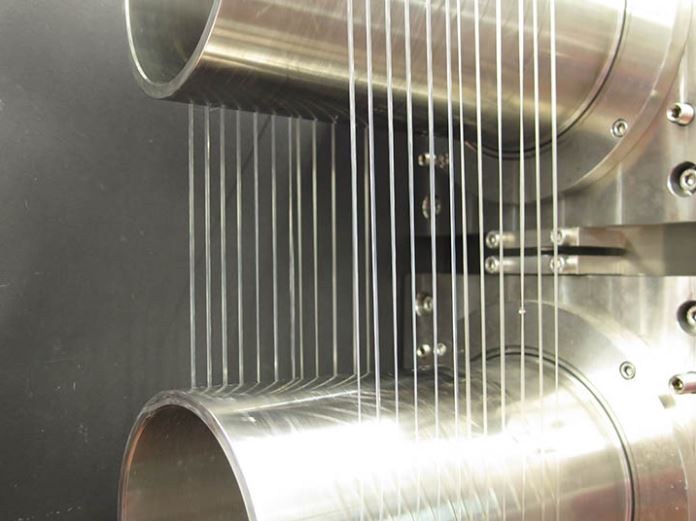 Circular business models such as rental, resale, repair and remaking already represent a $73 billion market and are expected to continue growing as customers become increasingly motivated by affordability, convenience and environmental awareness, according to new research from the Ellen MacArthur Foundation. Currently, however, these models do not always lead to environmental benefits for the fashion industry, particularly if they are seen purely as ‘add-ons’ to a traditional wasteful model as opposed to central to all business activities.
Clothing production doubled between 2000 and 2015, while the time we use clothes fell by more than a third. 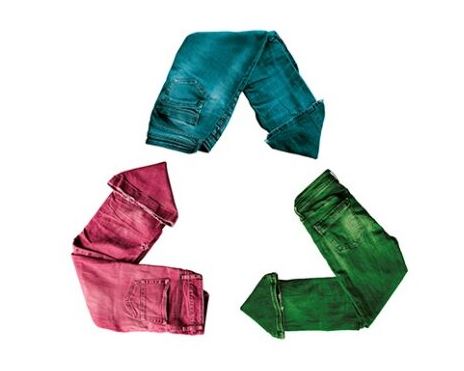 Biolumen Lab is a classroom—an inflatable, cell-based one at that—for secondary school students to experience a week of science-based learning, generating curiosity and­ promoting science as a potential career path. This is done through extracting and sequencing DNA from plant and fungi. The resulting strings of numbers and letters are then used to control the light and sound environment of the Biolumen lab at the end of the week-long experience.
The structure, built by Canvasland of Levin, New Zealand, uses pad eyes strategically placed to create random bulbous sections on the inflatable to represent the cell. 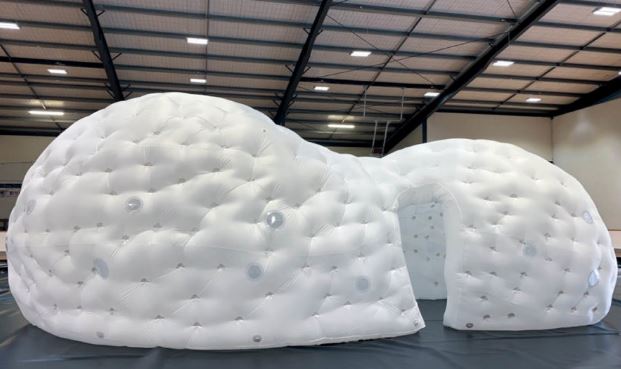 Tapis Magique is a pressure-sensitive, knitted electronic textile carpet that generates three-dimensional sensor data based on body postures and gestures and drives an immersive sonic environment in real-time. It unveils dancers' creative, unconventional possibilities of agency, intimacy, and improvisation over the music through a textile interface. It provides a canvas for dancers and sound artists to modulate sound, perform and compose a musical piece based on choreography and vice versa.
The knitted conductive lines are connected to a system hardware consisting of multiplexers, shift-registers, operational amplifiers, and microcontroller that sequentially reads each pressure sensing pixel and sends it to a computer. 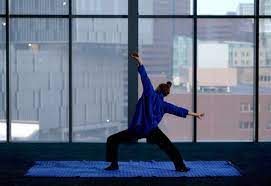